This is our second summer camp blog post, detailing our adventures in and around Glen Nevis and Fort William. To hear about what we got up to near Loch Lomond, check out our last post, and make sure to stay tuned for the next two instalments, to hear about the rest of our time in Scotland!

On Monday, our time at Loch Lomond was sadly up, and we all woke ridiculously early to take down camp. We’d just gotten all our kit into the van when the heavens opened (again…), resulting in a mad scramble to get on the minibuses. Soon we were on the road again, heading to McLaren Leisure Centre for the day, and eventually Glen Nevis for our next campsite.

Once we arrived at the Leisure Centre, we quickly changed into sporty clothing and still slightly soggy trainers from Saturday’s watersports. We started with a Leaders versus Patrol Leaders game of laser tag, although unfortunately the technology broke before it could tell us about the inevitable victory of the PLs. Climbing and table tennis were also on offer, with some of our more experienced climbers scrambling up the walls with no hesitation and some off the newer ones getting a nice opportunity to develop their skills.

After a short lunch, we entered the sports hall to play football, basketball and badminton. This soon got very competitive, despite nothing more than everyone’s pride being at stake. Everyone worked up quite a sweat, so we followed this with a refreshing swim, which soon turned into messing around on the inflatables and racing (this is WWESU we’re talking about, after all…). 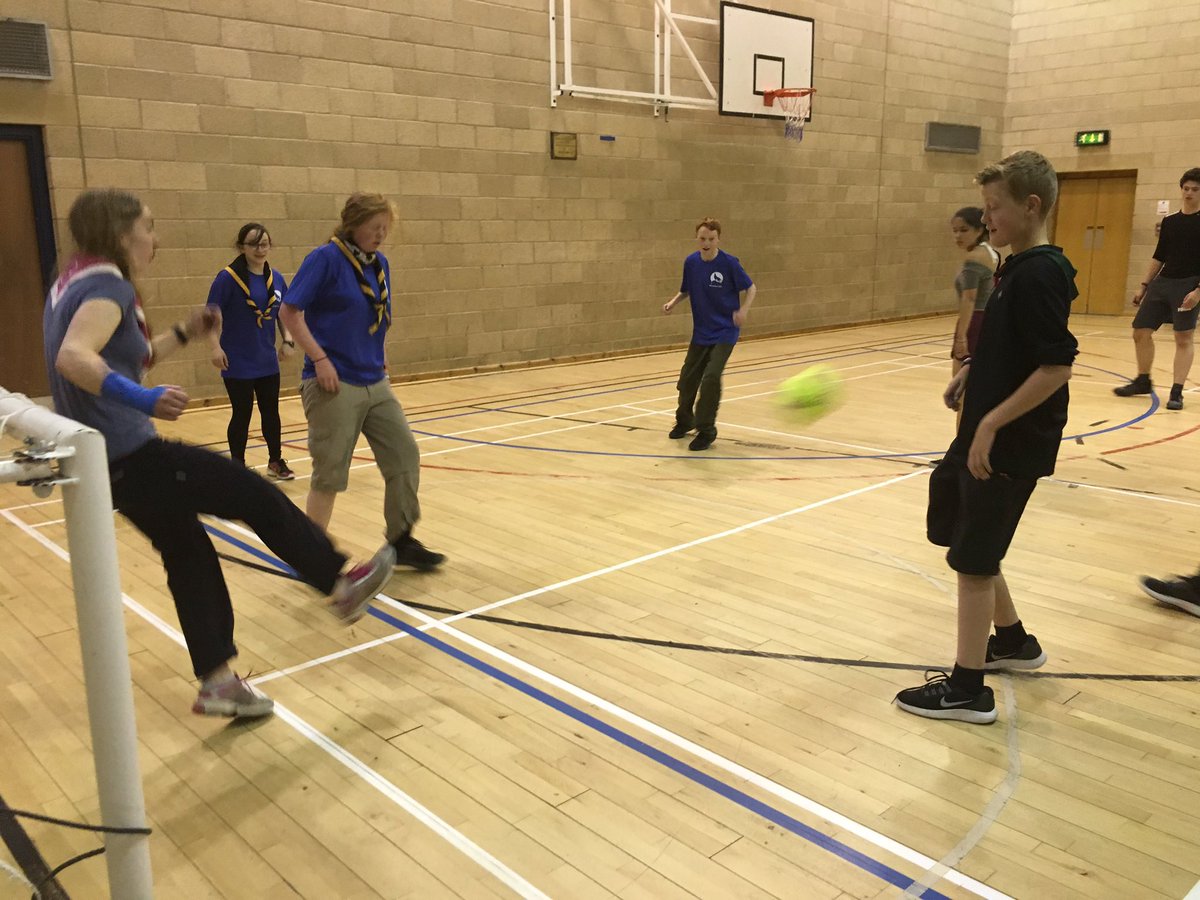 Next, everyone took advantage of the showers to clean off the accumulated layers of Scout camp dirt, before heading back to the minibuses for the drive to Fort William, where we did some more shopping. Having stocked up on the essentials (houmous, wraps, chocolate biscuits…) we returned to the buses and completed the short drive to Glen Nevis campsite, where we would spend the next few days camping at the foot of Ben Nevis.

Tuesday presented us with a series of opportunities: tackle Ben Nevis, hike to Steall Falls, or spend the day chilling in Fort William. Eight of us decided to take on Ben Nevis, braving the weather forecast of constant rain. Having committed ourselves to this challenge, we gathered up the necessary kit and made sure we were all fully waterproofed. We then set off, striding up the steep path with typical WWESU determination. This soon proved hard work, the rain turning the trail into a makeshift stream.

Once further up the path, we were again presented with another decision: to take the easier but less interesting route, or the more challenging Carn Mor Dearg arête. The arête was soon found to provide a more stimulating hike for all involved, and therefore we headed in the opposite direction to the route taken by pretty much everyone else on the mountain, making our way to the CIC hut. The majority of the altitude was gained by clambering up a 45 degree slope to reach a height of approximately 1100m. This brought us up to the ridge, where the rapidly shifting mist allowed us brief views of the valley from which we had just come. Eventually we reached the end of the arête, leaving us with only another steep clamber up to the summit. Thanks to Leader Tom’s excellent navigation, we soon reached our goal, and stopped for a well-deserved snack. 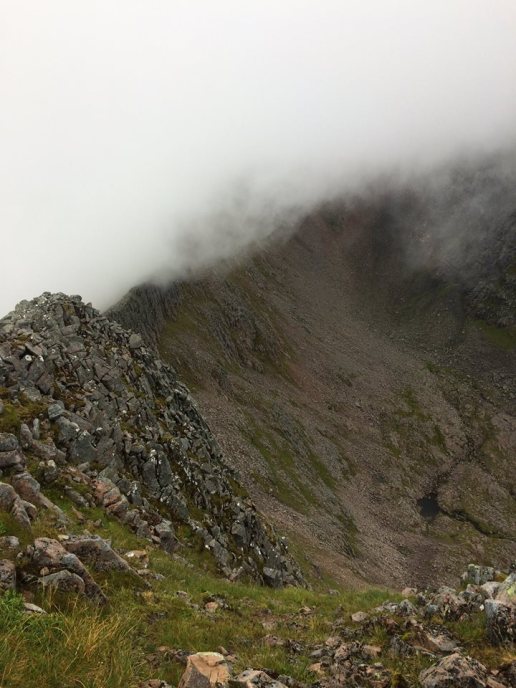 Unfortunately, we hadn’t managed to time our visit with one of the 10 days a year on which a clear view from the summit of Ben Nevis is possible, so we weren’t treated to a view of the surroundings. However, we did all appreciate the great sense of achievement that reaching the summit gave us, especially in defiance of the poor weather. We soon pressed on, just as the rain started again, using the handily placed cairns to guide us off the summit. We decided that, partially obscured by mist, these cairns either resembled robed Jedi or super creepy women (think ‘Woman in Black’ kind of style). After a while we rejoined the track that we had left earlier and made our way down the hill, as the rain really started up in earnest. As we staggered back into camp on achy feet, weighed down by sodden waterproofs, we were buoyed up by the thought of the warm dinner awaiting us and a sense of pride in our achievement.

While that determined group gathered their efforts for the trek up Ben Nevis, the rest of us sought a more chilled rest day and decided on a short walk up the Glen Nevis valley to Steall Falls, the second largest waterfall in Scotland. After a short stop for lunch where we enjoyed the staggering view of the 120m falls, it began to rain and we decided to risk getting a little wetter by crossing the river to take a closer look at the base of the falls. To cross the water, we took the Steall bridge, consisting of a single wire for your feet as well as two supports to hold onto as you walk. Once we had all precariously crossed the river we followed the mud that we assumed was some kind of path – wading at times and occasionally losing shoes – until we reached the base of the falls. Water crashed violently around us, the struggle to stay dry having been abandoned a long time ago. 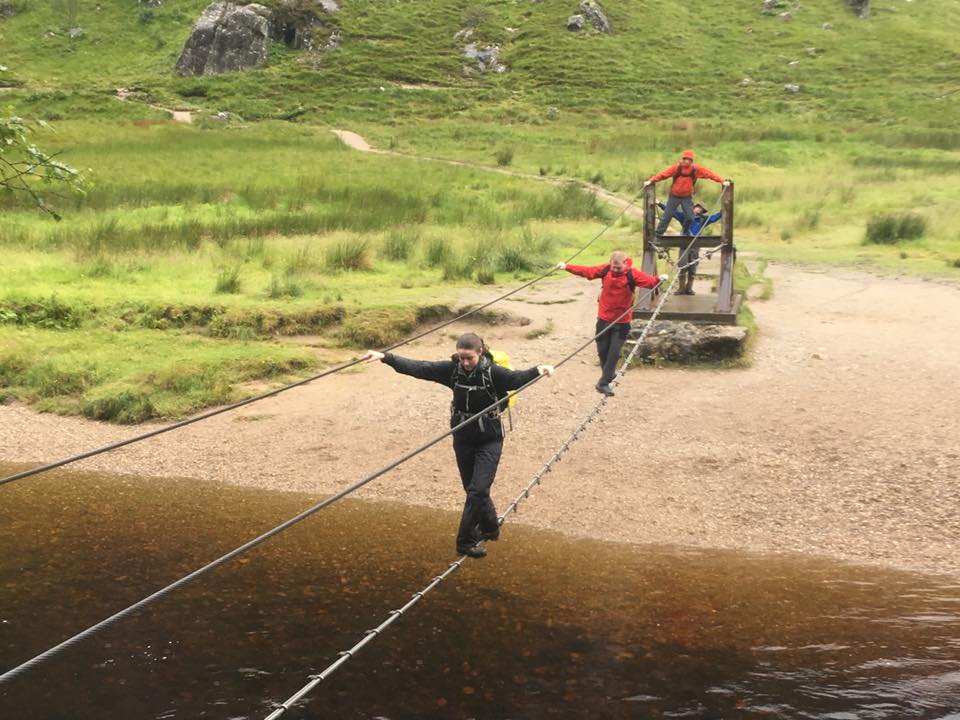 When everyone was ready to leave, we followed the river until it was a little shallower and slower, where we struggled across – if anyone had managed to keep their boots dry up until that point, this soon changed. After several soggy river crossings and a charming walk down the hill we arrived back at camp. Some of us were then driven into Fort William where we hit the outdoor shops. Many bargain hunters went in search of the fluffiest fleeces and warmest base layers… It was a very snuggly group of Explorers who returned to camp later that evening for a quick dinner and cake before bed.

Wednesday brought a morning of sunshine to our previously grey trip. We packed up camp and bundled bleary-eyed into the minibuses and headed to the Glen Nevis Highland Centre, where the Leaders treated us all to a much-need cooked breakfast. Having eaten our fill, we got back into the buses and drove to Vertical Descents on the River Inchree where we were greeted by the friendly canyoning instructors. After putting on wetsuits, harnesses, buoyancy aids, helmets and shoes we walked up to the head of the canyon, slipping and sliding in the bog along the way.

The waterfalls at the start of the canyon were spectacular, and we were all mesmerised and terrified by the water. The instructors guided us through a series of slides, climbs, swims and jumps. The adrenaline rush jumping off a ten-meter-high cliff and into white water was both sickening and amazing. Almost everybody shied away from the cliff edge but the wonderful instructors coaxed us over the drop and nobody regretted it.

We hurried back to get changed and shovel down some lunch before hopping into minibuses and driving to the via ferrata which was also run by Vertical Descents. Via ferratas – ‘iron road’ for those of you that don’t speak Latin – are climbing routes that follow metal rings, staples and bridges driven into a cliff. The via ferrata we climbed was next to a waterfall and went 110 metres up the cliff face, managing to be both terrifying and awe-inspiring.

The rings made for easy climbing and yet again the instructors were energetic, leap frogging over us and feeding us edible plants from the side of the cliff. Unfortunately, half way up the drizzle set in but the view was still astounding. After reaching the top we scrambled through the bracken down the hill back to Vertical Descents where the Leaders had hot fish and chips ready for us, which we ate in the minibuses.

Soon we were back on the road again, heading up to the Cairngorms National Park. Most of us took the opportunity for a quick nap, so we awoke at Bagaduish Activity Centre to the dark shapes of the Cairngorm mountains. Finally, we set up tents and crashed exhausted into our sleeping bags. 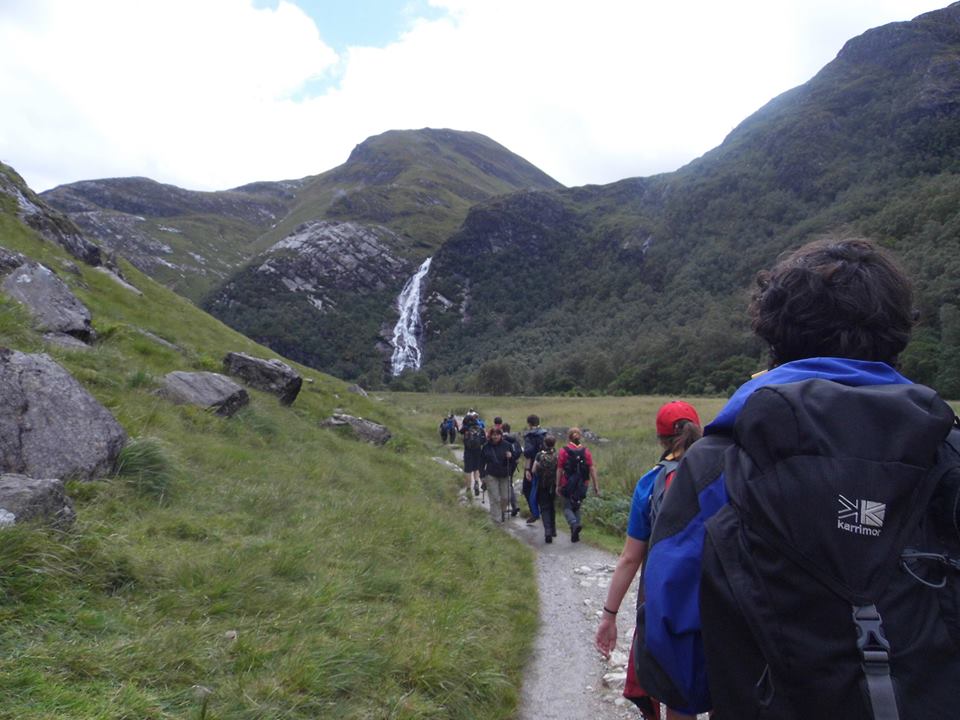 Meet our Quartermasters! Today they met at our stores to tidy and audit the Unit’s equipment ahead of a busy summer of camps and expeditions.
As summer expeditions edge closer, Explorers have been making final DofE preparations with a consolidation session. The night included a first aid recap, kit check and river safety practical all ensuring our Explorers were ready for a safe and fun expedition in a few weeks time!
We’re back at it again! We’re spending our weekends canoeing (and capsizing) along the River Lea allowing our explorers to further develop their paddling and canoe rescue skills.
For the first week back after half term and continuing with our weekly training, one of our @dofeuk groups went for their second paddle session on the River Lea to build on canoeing skills that they worked on a few weeks ago. Undertaking a 2+ day expedition in a canoe is hard work, so it’s vital everyone is confident with their paddle strokes and rescues.
In true Wild Wolf style, only 5 days after restrictions were eased, 4 of our PLs and 2 Leaders were off for a weekend of hiking in Snowdonia. Being the first camp back after over a year and the first in the district, everyone was super excited and the camp was definitely one to remember! Highlights were a tricky scramble up Tryfan, a dip in the freezing river Afon Llugwy and then a sunset walk along it. Go and check out our blog post by clicking the link in our bio!
Take a look at one of our @dofeuk training groups spending the evening on the River Lea. The team spent the night learning paddling skills essential for a successful expedition, as well enjoying some canoe based games to finish off the evening.