Last week the Unit took on one of its most complicated and intense summer camps yet: a 10-day tour of Scotland, travelling to Loch Lomond, Glen Nevis, the Cairngorms and Edinburgh. We took part in a huge range of activities, from mountain biking and water-skiing to hiking and wild camping, which came together to make an experience that we’ll never forget. This blog post details our adventures in and around Loch Lomond, and the rest of our travels will be told in instalments throughout the next week, so watch this space to hear the full story!

It was a cool, dark morning as we arrived at Scout Park at a time far too early to be reasonable. As the Explorers dribbled in, the van was packed, the minibuses loaded, and we soon set off. The drive was a long one, but musical soundtracks were a key feature throughout the journey, proving invaluable in keeping spirits high. 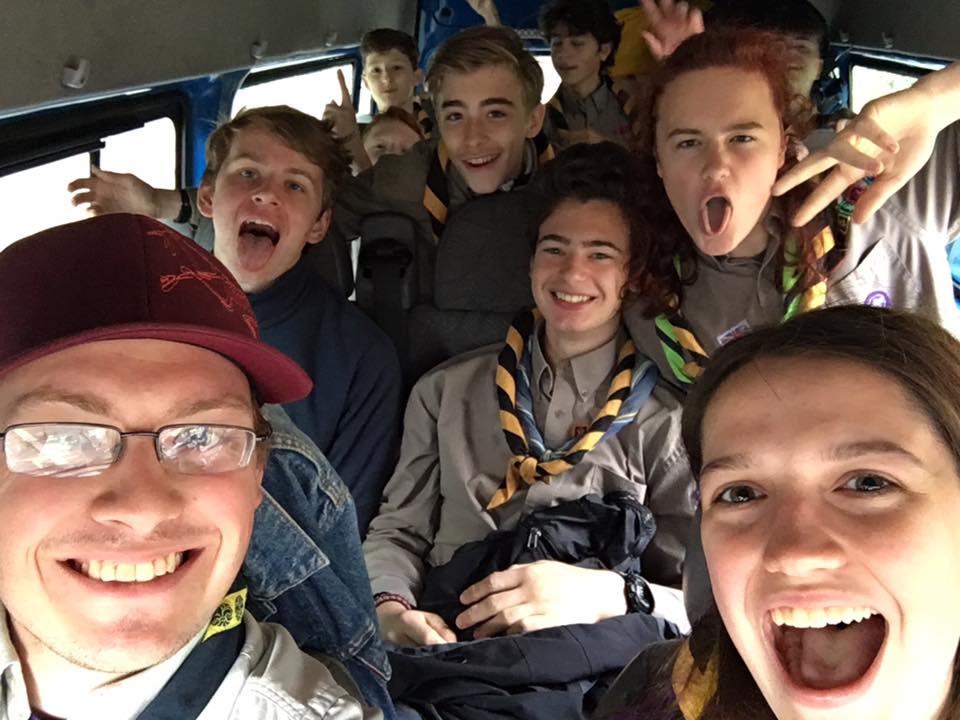 11 hours and a shopping trip to Glasgow’s Tesco later, we arrived at our campsite, situated right on the banks of Loch Lomond. After a speedy setting up of tents, tarps and Trangias, we gratefully headed off to bed, both apprehensive and excited for the nine days to come.

We woke up with expectations of a beautiful sunrise, only to have our hopes quashed by the dreaded rain. A game of Camp Cluedo was initiated: each person gets a victim, a place and murder weapon – usually a GoPro, tent peg, or some other article of essential Scouting equipment – and has to ‘kill’ their victim by giving it to them in the designated place, by the end of camp.

We drove a little way around the loch to our activities base. Two teams were on watersports in the morning, while the other two went mountain biking. Cycling around provided some excellent views of the loch and surrounding hills, despite the constant presence of the rain, and we didn’t even get a puncture (luckily for one team, none of whom knew how to fix one!). For watersports one group had a chance to go water-skiing and the other stand-up paddleboarding, so they had a lot of fun trying out some new activities. Plus, the rain greatly reduced the damage caused by falling in, as we were all pretty wet anyway!

With everyone returning to the base in various states of dampness under a rain streaked and windy sky, the minibuses were the lunch spot of choice. After lunch the groups were swapped, with some doing mountain biking and the others kayaking. The kayakers paddled around, not afraid of capsizing and getting wet (as many people quickly did). From watching us, an observer would be forgiven to thinking our aim was in fact to get as wet as possible. One of our most interesting finds was a half-sunken bench, and the photo opportunities this offered were too good to pass by.

Having exhausted all the bench-related photo options, we set off again and speedily arrived at an island which looked like it had been plucked out of ‘Swallows and Amazons’. After some exploring and another group photo, we clambered back into our kayaks and returned to the shore. With the day’s rain not proving enough for some, we once again plunged into the loch, before returning for dinner at camp.

Another not so dry start as we manoeuvred our way out of our sleeping bags, ready for a day at Go Ape in Aberfoyle. We all enjoyed being monkeys for a day, swinging around the course and throwing ourselves down zip wires, all while maintaining a tight grip on the Unit GoPros that we’d been entrusted with. The final zip wire provided an amazing view of the valley, if you dared look down! 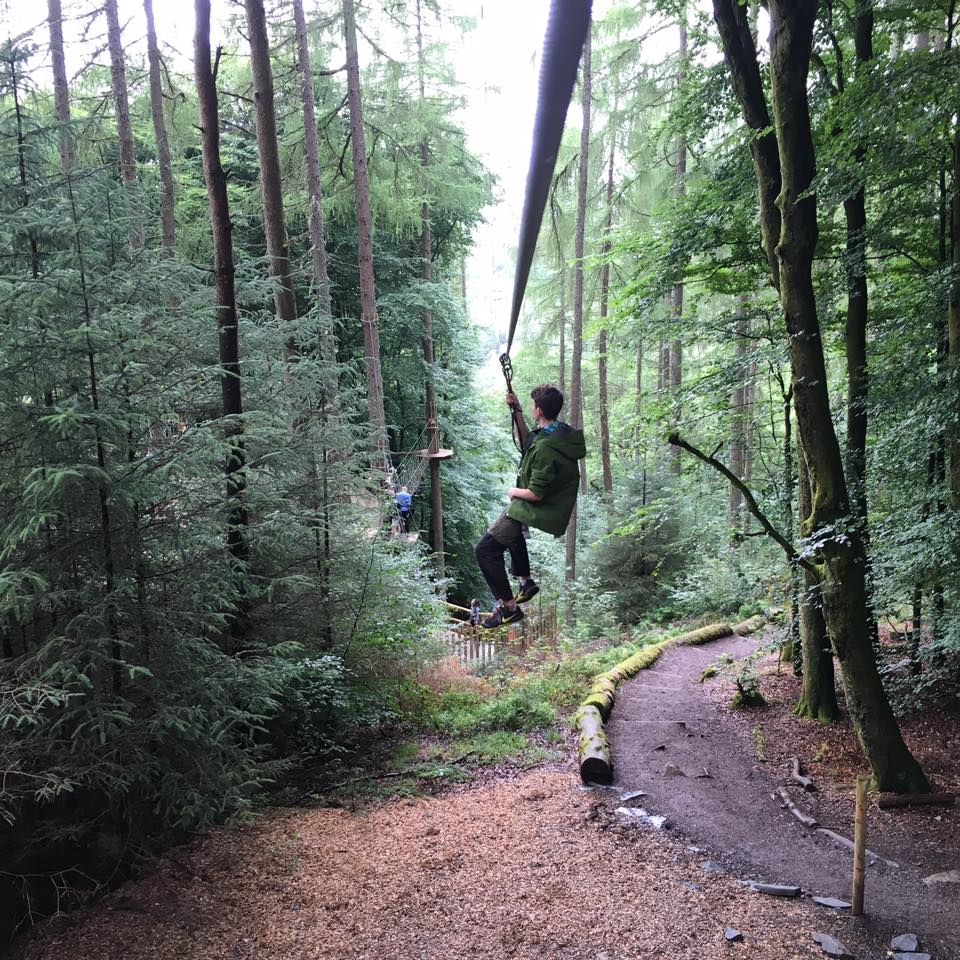 We had a brief lunch before heading back a little way in the minibuses to be dropped off for an incident hike back to camp, organised by Leaders Bradford and Kamran. At different stages on our hike we engaged in a series of excellent challenges, re-enacting duels near castles, dancing crazily, and adapting several ‘Lord of the Rings’ scenes (watch this space to see all this in our final video!). 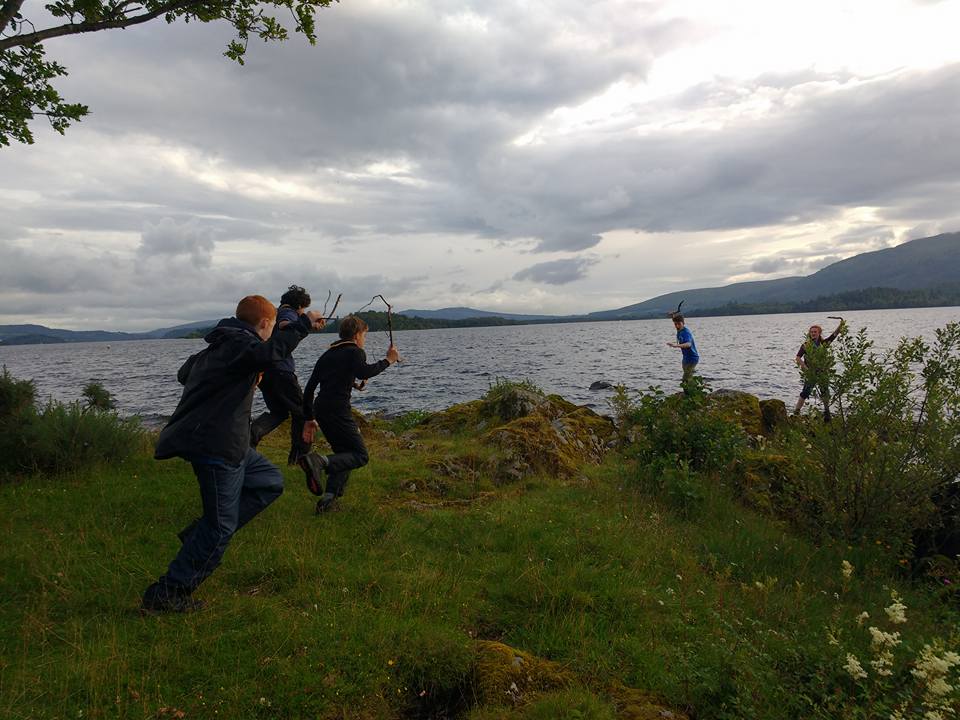 Worn out by all the energetic dancing, we were very much ready to eat dinner when we finally arrived back at camp. Later, we gathered under the Leaders’ tarp to perform our final challenge, a poem about the Leaders, all of which had the Unit in hysterics. And then time for the results: Leah’s team won!

The day was also rather eventful with regards to our ongoing Camp Cluedo game, as Ross became the Unit’s most successful serial killer after making four ‘kills’ in quick succession. After all the exertions of the day, we were grateful to soon head off to bed.