(Thanks to Kamran for the title…)

In February half-term 12 members of Wild Wolf ESU did a five-day Winter Hillwalking course at renowned outdoor centre Glenmore Lodge in Scotland. The week saw us greatly improving our winter mountaineering skills and trying lots of new things (think snow shoes and shovel-up shelters…), in the beautiful Cairngorms National Park. With the weather ranging from perfect clear skies to 60mph winds, we certainly got the full Scottish experience. Keep reading to find out how we got on!

On Sunday we got the train to Aviemore and arrived at Glenmore Lodge, just in time for dinner in the bar. We also caused a minor traffic jam in the Lodge store, as 12 Scouts attempted to book out all the kit we would need for the next day. After heading back to our rooms clutching various assorted equipment (shovels, winter boots, Goretex jackets, avalanche probes, ice axes, crampons, helmets… you get the idea), we went to bed in preparation for the much-anticipated first day of our course. 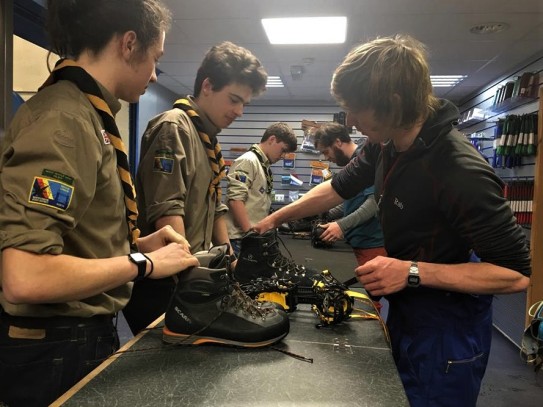 On Monday we made good use of the impressive breakfast spread before meeting with our instructors, Colin and Mandy. Having talked through our aims for the week we got straight out onto the hill and walked part-way up to the Cairngorm plateau. The instructors then identified the perfect patch of snow for practicing ice axe arrests, and soon enough we were all having a great time sliding around on the slope and getting thoroughly covered in snow. For us snow-deprived city kids, this was a proper novelty. Then, heading up onto the top of the plateau, we got the full benefit of the excellent visibility and amazing views, making us truly appreciate the beauty of the Scottish Highlands. The wind picked up a bit on the way down, but this would prove to be nothing compared to what was in store for us in the next few days!

We returned to the Lodge, all feeling very cool due to now kind of knowing how to use ice axes properly. For some, the evening meant jumping into the kayak rolling pool and learning how to roll, while others went to two lectures put on by Glenmore staff. Discussing winter navigation and avalanche awareness, both talks were really useful in giving us a theoretical basis for the rest of the week.

We began the day with a 7:45 breakfast, and then headed outside (still within the Lodge grounds) for some crampon practice. Colin lead us through a series of circuits on the snow-covered mountain bike tracks of increasing difficulty, beginning with running along a thin brick wall, and ending with going up and down steep boulder field tracks. After trying out several important crampon skills, we decided to take advantage of the good weather and head up Meall a’ Bhuachaille. We each took turns navigating and using different catching features to make our way to the foot of the mountain. Here we took a quick lunch break in a nearby bothy, and then headed up the mountain using bearings along a vague footpath. Although the snowy terrain was pretty new for a lot of the group, we all quickly got the hang of it, and we also used our new avalanche-forecast-interpreting abilities to make sure we were staying safe at all times. It took us roughly an hour to reach the summit, on which we took a few celebratory photos and then headed back down. We ended the great day with a well deserved slice of cake and a hot chocolate.

Over the previous few days we had all seen the forecast for the “horrendous blizzard” that was due to blow in, but I don’t think any of us were quite expecting the complete whiteout, 60mph winds, and driving snow that we received. (And that was only at around 550m – it was gusting 100mph at the summits!).

Despite some highly challenging conditions we were determined to get outdoors. We followed the closed road up the hill through deep snow to reach what was imagined to be the car park. Struggling through the winds and snow we couldn’t see more than a few metres ahead. We stuck close together and huddled behind an old ski centre for a quick bite to eat and some shelter from the howling wind. 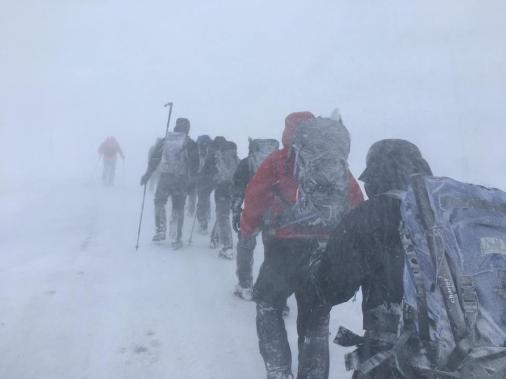 After crossing a perilously icy and exposed bridge (with no hand rails!) and cautiously scrambling down a set of steep and snowy stairs, we dropped down into the shelter of the woods in the valley. Hiking back through the snow was still no walk in the park but the magic of the trees was enough to distract from the occasional slip, trip, or snow ball to the back of the head.

When we arrived back at the lodge we ditched our rucksacks and set out around the woods to practice our micronavigation. For some of the group taking bearings and slope aspects was as easy as reading, but I definitely improved my compass skills in leaps and bounds and everyone took something from the exercise.

After a long day it was back to the Lodge for cake and kayak rolling!

On Thursday we were apprehensive about the challenging weather, and were keen to see what Colin and Mandy had in mind. At first we were disappointed when we saw the maps they handed out as the hills on them were not very high! However, they turned out to be plenty high enough…

We drove down into Aviemore and parked at the bottom of the “Burma Road” – a 4×4 track into the hills. We followed the track up to about 500m and then strapped on snowshoes and put on goggles. It was most people’s first time in snowshoes and there was a fair bit of falling over at first, although we soon got the hang of it.

We navigated up to Geal-charn Beag first where the wind was blowing pretty strongly at the top. From there we dropped down into a little saddle and then headed up onto Geal-charn Mor. You might think it would be easy to find the top of a hill, but it actually took quite a long time in the disorientating whiteout to work out which way was uphill and we walked past the summit several times. We eventually located the trig point by trudging across the plateau on snowshoes in a line until one of us literally walked into it! 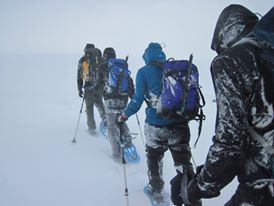 The final day of the course we awoke to a calm day with sun beaming down onto the hills. One group hiked up to the Cairngorm plateau via the Fiacaill ridge – putting our crampon skills into practice on the Grade 1 scramble. Megan especially loved the sheerest slopes because they provided a chance for some proper ice axe action. As we walked towards Cairn Lochan we saw the corniced snow on the south eastern slope, which had built up from the north western wind – all important things to consider when assessing avalanche risk.

While one group was heading up into the hills, the other stayed low to practice their skills. We hiked along to a snow-filled quarry which had the perfect amount of snow to build a shovel-up shelter. This amazing building started with us piling our bags up on the snow and then totally covering them with snow. We then dug a hole as an entrance and pulled out the bags, hollowing as we went, and created a cute little (surprisingly warm) igloo snow thing that we ate our lunches in. Before long we had to sadly say goodbye and headed back to the Lodge. 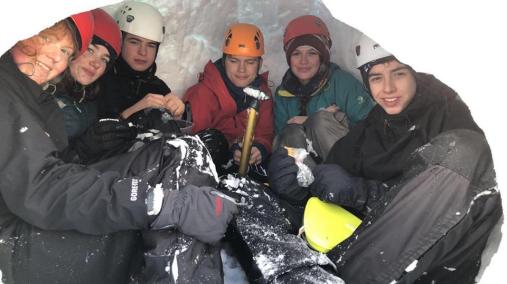 After checking out of Glenmore Lodge we got dropped at Aviemore Youth Hostel, where we would be spending Friday night. We dumped our kit, played a quick game of Monopoly, then headed out to the much-recommended local Italian restaurant for a celebratory last meal. Once back at the hostel we put the pool table to good use (although the skill level of the players may have been somewhat questionable…), before getting to bed.

A big thank you is in order for our instructors Colin and Mandy; overall we all had a really great week, learnt a lot, and will definitely be doing a lot more winter hillwalking in the future!

Filmed and edited by the Scouts themselves, both parts of our trip video can be watched below or on our YouTube channel. Take a look to find out more about how our week went!

Tonight our Explorers had a go at developing bouldering skills at @stronghold_uk Climbing Centre! Bouldering is rock climbing without ropes so rather than height, flexibility, technique and strength determine your ability to reach the top.
Ahead of Autumn Survival Camp this weekend, we spent last night practising our whittling - a useful skill for building shelters, which we’ll be doing on Saturday!
This evening we navigated, through extraordinarily rainy conditions, to find checkpoints dotted around the local area around Scout Park. There were bonus points for whacky poses- swipe to see!
Want to hear more about our recent camps? Well, we’ve got not one but two blogs hitting your screens this evening! Read all about our 2021 DofE expeditions or hear from our new T1 permit holders about their time in Snowdonia by clicking the link in our bio!
Tonight we enjoyed an exciting evening orienteering in Trent Park, competing for the Patrol Cup. With an A4 map and compass, the Explorers used their navigation skills to first work out where they were and then find as many checkpoints as they could, with the two winning Patrols reaching 9 in only 70 minutes. It came down to a tense match of Rock Paper Scissors with the Foxes finally claiming victory! Well done!
We are disappointed to announce that Wild Wolf Explorer Scout Unit’s annual community fireworks display has been postponed for a second year.