After lots of kit preparation and various pieces of paperwork (last minute for some!), the nine Explorers and Leaders who were being assessed to lead hill walking were ready to leave. We started the long drive up to Bethesda in Snowdonia – a place we all know and love! Once we had arrived many hours later, we headed straight off to bed knowing we had a long day of walking ahead of us.

The next morning we awoke to the smell of a cooked breakfast – much appreciated by all present – and after making sure we had the appropriate kit with us, set off into the hills for the start of our assessment.

Marlon’s group started off with some micro-navigation, which tested their ability to navigate a group through low visibility conditions. Some of these short legs proved to be a little trickier than others as Dave was told to navigate his way to a point between two blades of grass. Despite this, the group was still successful in meeting the targets in a rather featureless landscape. As well as learning lots about hill walking and navigation, we also discovered where the jelly-monsters of Snowdonia live; they rise up to the surface after rainfall causing some rather unstable boggy ground.

Meanwhile, Stuart’s group was practicing their general navigation combined with some group management. This involved navigating our way through various features that may or may not have existed, as well as being able to keep track of where we were without being told where had just been or where we were headed. Throughout our walk up to the summit of Drosgl, we encountered wildlife such as carnivorous sundew flowers, cotton grass and lots of sheep – unfortunately, not all alive.

At lunch, we switched groups and continued honing in on the skills we knew as well as learning lots more: handrailing, boxing and catching features being a few of the many techniques we were using. After a few more hours out on the hill, both groups headed back to the hostel for dinner and naps (or very important jigsaw puzzles for some) before our long-awaited night navigation assessment. 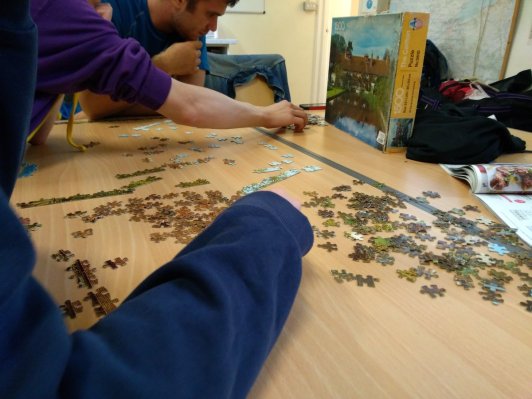 Hearing rain hammering down on the roof of the hostel confirmed what we had read earlier on the forecast and, as 10pm approached, everyone layered up with fleeces and full waterproofs in preparation for the weather conditions we had been dreading. However, on arriving at our starting destination the rain had stopped. Everyone was already overheating and had to strip off a few layers before continuing on. Contrary to expectations, the sky was relatively clear and host to a beautiful sunset over the Welsh landscape – meaning we didn’t actually have to use our headtorches for about another half an hour!

In a similar fashion to the morning, we split into two groups and began navigating short legs in a combination of pairs, groups and individually. Although still a challenging activity, everyone enjoyed themselves more than they thought they might have and even though it was our assessment we learnt a lot. Along with the surprise of the amazing weather conditions, both groups came across toads and frogs and one group was even accosted with strange green lasers being shone from a nearby house. After a rigorous four hours of night navigation, we were collected and driven back to the hostel where we all tucked into the cheeseboard Marlon had provided. Some may argue that our priorities are little skewed but cheese always comes first. Even at 2am. (This is one of the first things new members of WWESU will learn.)

The next morning while packing up we were called in to have our individual debriefings with one of the assessors. Everyone passed, and we were all given some great pointers for where to go next! Soon after we were ready to leave, so we loaded up the minibus and made our way down the winding Welsh roads towards Betws-y-Coed – one of Wild Wolf’s favourite post-camp lunch spots. The following few hours were spent browsing various outdoor stores, eating ice cream and relaxing by the river. Unlike the previous day, a conscious effort was made to stay protected from the surprisingly bright sun. We finally piled back into the minibus and headed back to London, all exhausted from the challenging weekend but very happy, with more knowledgeable T1 Hillwalking permit holders in the Unit – just in time for Summer Camp.

Big congratulations to our Leader, Nick, who has passed D1E minibus and trailer test this week. Here’s to even more adventures! 🚐
Tonight our Explorers carefully concentrated on their backwoods cooking expertise and made some delicious food.
This week we were given random word prompts to create either a performance or presentation. Our Explorers rose to the challenge… creatively. It was definitely a night full of a lot of laughs!
Good luck to all our exam-takers this week! Keep working hard, you have a fantastic summer of WWESU camps and activities lined up for you after. You've got this! ⭐
Over the last few days our Explorers have been adventuring through the wonderful Tolmers Campsite for a brilliant @northlondonscouts District Camp, packed with fun and festivities!
In this week’s session we made mocktails (emphasis on mock!) and enjoyed a pub quiz devised by one of our own Patrol Leaders.