Some time back in August, Ellie, Zuza and I (Carina) decided to do the  Explorer Belt Award – a ten day hike in a foreign country. As the planning got going, we realised something pretty big: we were going to have to finance this trip somehow… cue the fundraising!

Our plan was to hold a cake sale on the street and see what we could make. Having all rushed home from school on Friday to mass-produce baked goods, we turned up this morning at Crouch End clutching bags of cake-filled tupperware and lugging a folding table. We soon found out we’d missed something pretty key: this weekend was the launch of the Crouch End Festival, the UK’s largest community arts festival. While this would mean plenty of customers, we weren’t sure how the organisers would react to us encroaching on their turf! A quick chat and a wave of a Scout scarf later, and everything was sorted: so long as we kept out the way of the WI, we could stay.

We quickly got set up by the bus stop – always good for potential customers – and lay out our wares. Ranging from stacks of lemon curd muffins and exotic raspberry cupcakes to cheerful gingerbread men and super-gooey brownies, we definitely had something for everyone – or we would have had, if there weren’t so many people that insisted on sticking to their diets!

Trade quickly picked up as the streets got more and more busy. Wary of appearing like a stereotypical phone-obsessed teenager, I hid behind the table to publicise our cake sale on the WWESU social media. As normal, we got the usual amount of questions about who exactly we were – Brownies? Girl Guides? Nope, Explorer Scouts. 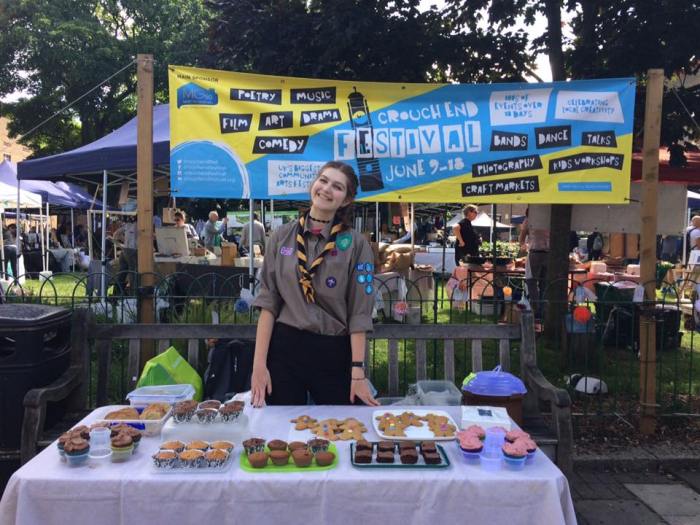 We also witnessed the repeated struggle between parent and child as to whether cake would be bought or not, which usually takes the form of:

Pretty soon we were running out of stock. The sun, which until then had been hiding behind a conveniently placed tree, now chose to make an appearance. We watched in dismay as Ellie’s beautiful raspberry buttercream melted into bright pink sludge, leading to the solemn sacrifice of two cupcakes to the bin (luckily most of them had been sold by then). Several gingerbread men had lost limbs as a result of tragic accidents, so also had to be sacrificed – although this time to a much worthier cause: the tireless Explorers behind the stall!

At around 2pm, four hours after we started, we decided to call it a day as our once highly aesthetic stall had diminished with each sale, until only two muffins were left – a much less inviting display. Trying not to look too shifty, we quickly counted our takings and concluded that we had made a respectable profit, which would go a long way towards financing our expedition in the summer!