It all started when I was rudely awoken by my alarm clock, aka, my mum. I met everyone at Scout Park and we finally set off after tying everything onto the roofrack and laughing at Joe and his mum’s poncho. From Scout Park we made our merry way up to the Lake District keeping moral high by listening to ABBA, and shopping on the way at Sainsbury’s. 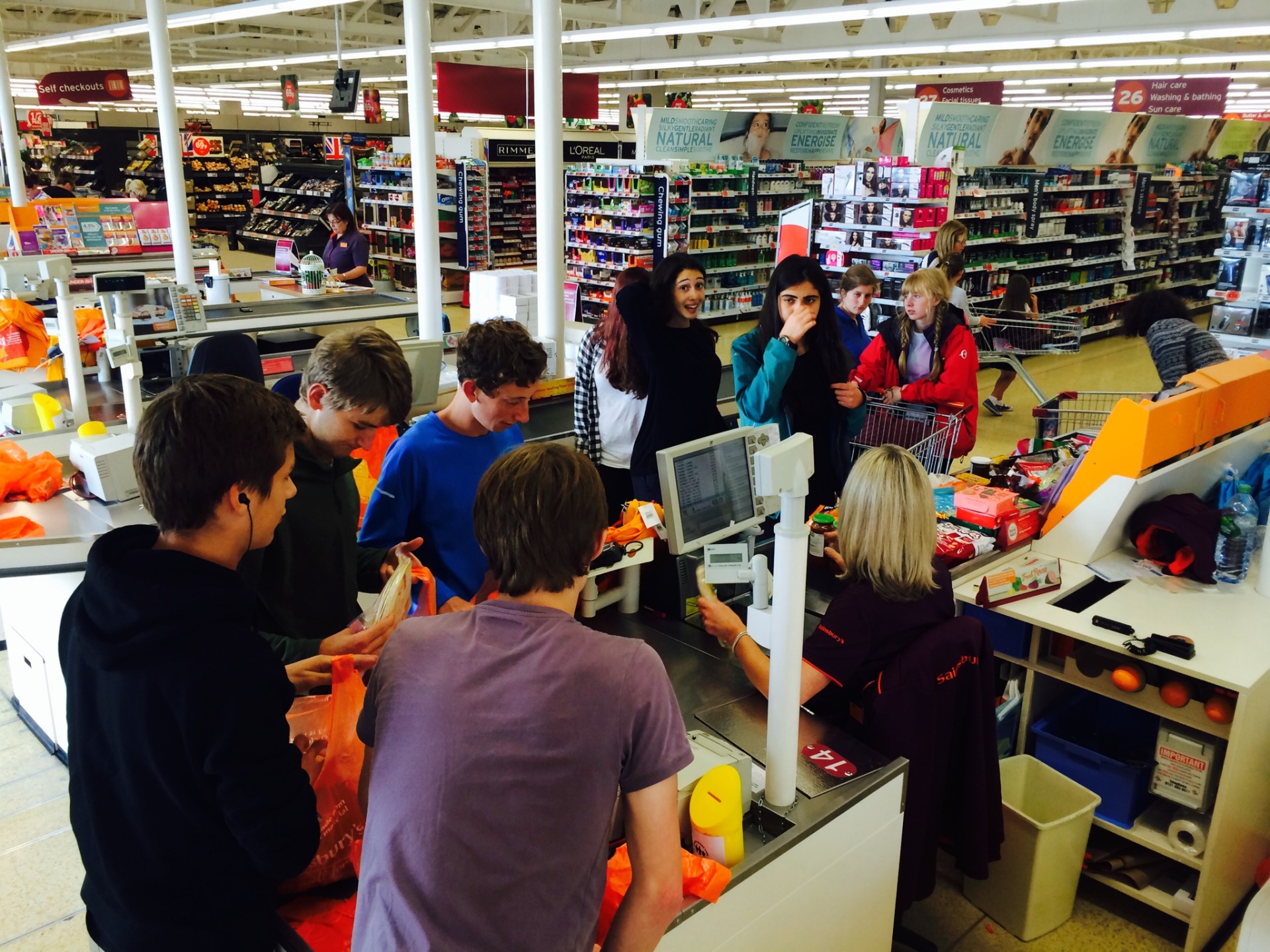 When we got to Great Tower we met our friendly assessor Tom, and while he was very nice it was obvious that he had a few issues with our planning. However, these were quickly sorted out and before we knew it we had been sent to bed.

As we slowly crawled out of our sleeping bags morale was high and we were looking forward to the day ahead – little did we know it was possibly going to be our hardest day! We were dropped off on the wrong side of a Windermere and naturally I was the one entrusted with the money to get everyone across on the ferry. On the ferry we met another group of Explorers, a few jokes were traded and after the journey we went our separate ways.

And so our great expedition had just begun and after only about three steps Joe was brought down with cramp. Luckily this was not an indication of what was to come later and after I told him to man up we were on our way. I was navigating and all was well, there were blackberries a’plenty on both sides of the track and we feasted on these little delights till our hands and mouths were dripping purple. After a short while we arrived at the start of the forest and our plan was to find our way to the look out point at the top.

Sadly we came out empty handed as there were no paths (which is stupid) and mountain bikers were bombing down the hill all around us (which was scary). This unsuccessful venture into the forest left us drained emotionally and physically and so with a little help from Matthew we found our way out and onto a much more Explorer-friendly road. As is often the case the end was always further away than we thought it was and we slowly realized we may have made the route too long and our first day may actually be our last. After many, many breaks and constant moaning from just about everyone, apart from the beast that is Matthew, we reached the campsite.

On the 2nd day we would hike over Scafell Pike, the highest mountain in England, and the walk actually started off quite nice, with a bit of sunshine as we walked through the valley. 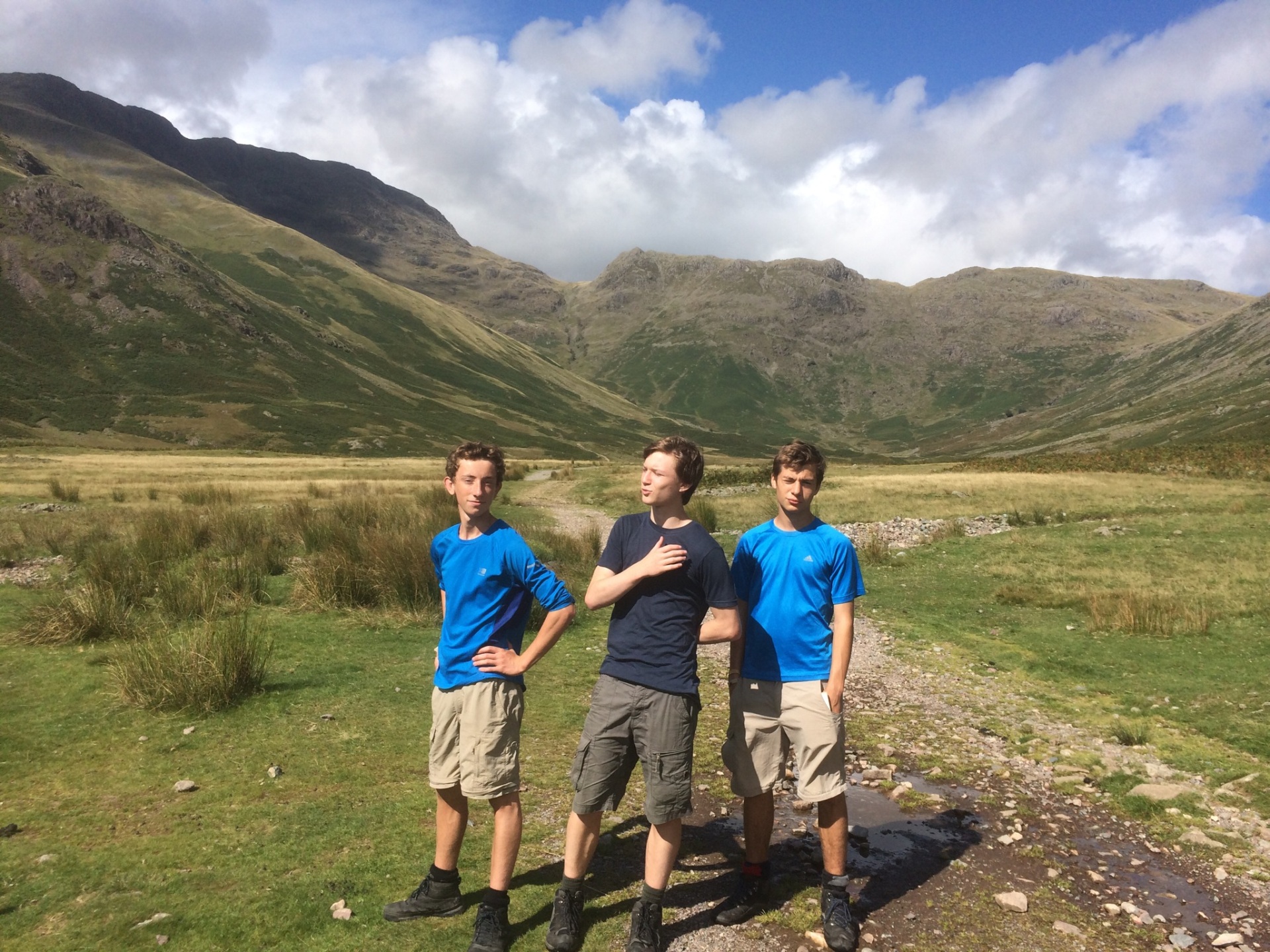 Just as we decided to turn our trousers into shorts, the weather ruined it all by turning into a rain storm in seconds. When this happened, we showed just how ridiculously unprepared we were: I jumped behind a rock to hide, James and Mathew curled into balls to be as unexposed as possible, and Joe dived under his mum’s poncho to hide. After a while we decided the rain was not going anywhere so we started our assent anyway.

The steep path went on for a while until we reached a point where the slope leveled out, and the rain finally stopped, and the wind picked up.

After some celebration and a small scare when a rescue helicopter flew right towards us then over our heads, we decided that we would go to the very top of the highest mountain in England. The climb was long and laborious, and it pushed us to the limit, but eventually we reached the top, which was a great opportunity to take some sassy pictures.

Actually it’s worth mentioning that we didn’t know exactly where we were camping, and so we had to walk around all the campsites in the area before finally arriving at the right one at 8pm ish, getting dirtily ripped of by whoever owned it (£9 per person), and eventually getting a really crappy night’s sleep.

We awoke on the third day with hope and motivation as we were more than half way through the expedition. Some of our things had gotten soaking wet in the night due to the massive winds and prolonged rain but the plastic zip-lock bags soon proved their usefulness by keeping the wet stuff wet and the dry stuff dry. We had also gotten into the spirit and momentum of the expedition and knew how to organize ourselves.

The valley we were in seemed to keep getting steeper and steeper with many false summits on the horizon. In addition, the wind didn’t exactly help our cause as it would drastically change direction whenever it wanted to, which meant we were constantly being dragged from one side to the other. By lunchtime we were dreaming of the slobish-ness that we would digress into at the end of our expedition – Home was the only thing to look forward to at this stage of the expedition, plus a KFC would go down really well. We pitched up at 5pm leaving us plenty of time to dry our wet clothes and make dinner before bed. It was rather discombobulating to be early as we were usually very late when we got to our campsite.

We awoke on the final day at a respectable time of 10:30 looking forward to our final day of walking and the chance to go home. The night’s weather had been kind and all our wet clothing had had a chance to dry out resulting in moral being high as we began walking. Today was supposed to be our easiest day, however there turned out to be considerably hillier than I had anticipated.

We started by climbing a steep path then walking round a skyscraping ridge at the top. Once over the top we started going round in circles in a marsh on the mountain. I didn’t know such things even existed, but apparently they are possible and we spent a good half an hour trudging around in one, unsure of what direction to go. After asking a stranger who seemed as clueless as us where to go, we set off in the direction he pointed us, and begun our descent down the mountain. 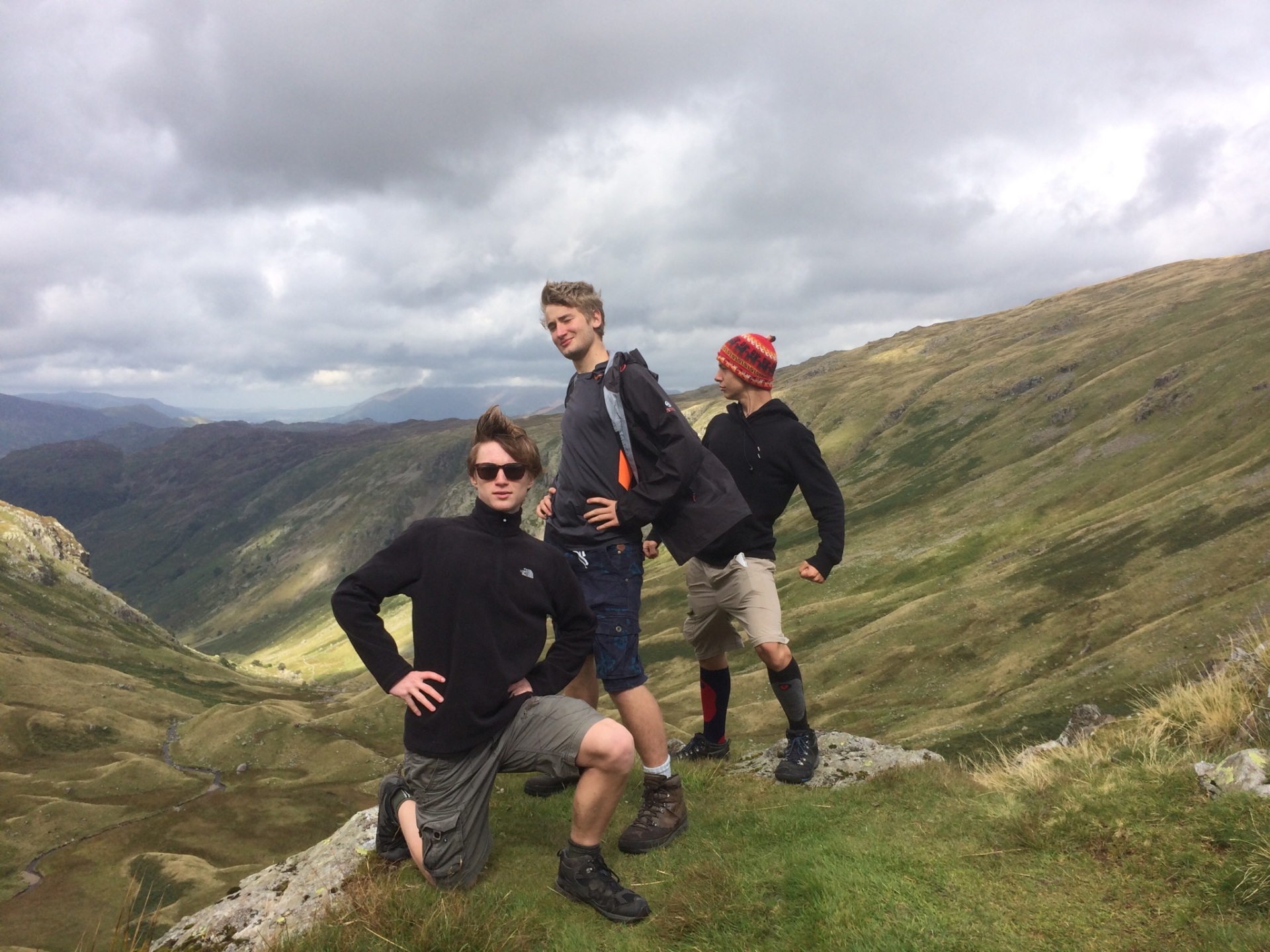 It was at this point where we were greeted with the always charming presence of our explorer scout leader Marlon, who promised us chips when we eventually made it to Ambleside; the legendary town where we were told to meet. With this newfound reason to go on, we rushed down the mountain, and then started walking down the long road to our finish point. There really isn’t much to say about the walk on the road, other than the fact that it was really long, so I’m just going to skip to the next bit. Many hours later, we eventually made it to Ambleside. We had done it, our quest was finally complete. 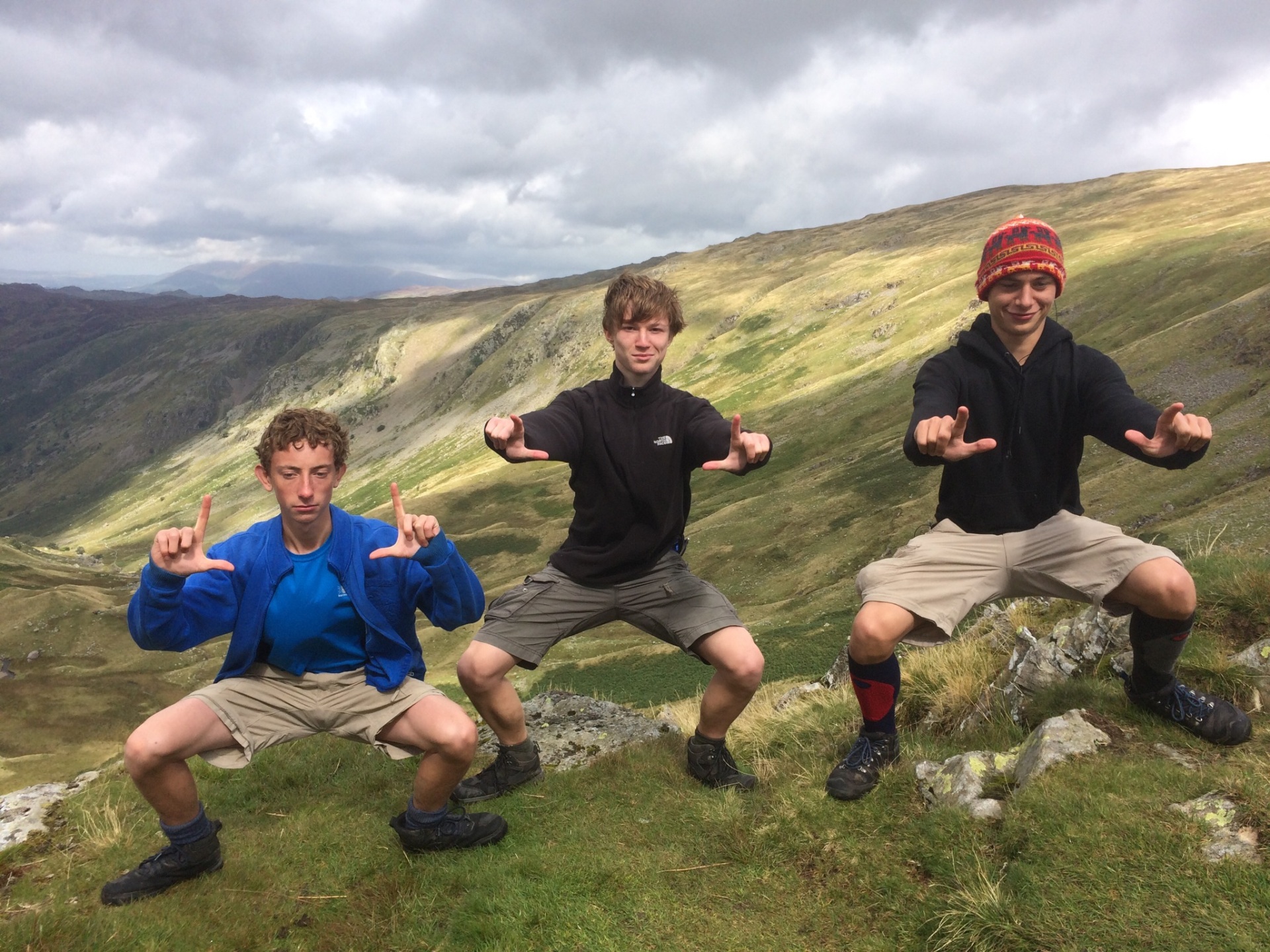 Well, not really. After a couple of minutes it dawned on us that we couldn’t actually remember where to meet the minibus in the town, so after aimlessly walking in circles we decided to just call Marlon and ask if we could be picked up. The details of what followed are not important, all that matters is that about an hour later we were eating fish and chips in a park, and we were chatting to our Assessor (we passed) and we were the happiest we had been in the whole 6 days.