On the penultimate day of camp 7 intrepid Explorers decided to hike up one of the larger mountains surrounding our valley. Thomas reports…

Our day started much earlier than anyone else’s with a planned get-up of 4:30 (which failed for me as it turns out setting your alarm too quiet to wake the rest of the tent up means it doesn’t wake you up!) but we managed to get out of camp only 10 minutes late at 5:10, leaving well before the sun rose.

Our hike started uneventfully leaving KISC but as time went on, we soon realised this hike wasn’t going to be a walk in the park, rather a very steep walk up a really big hill, but the view of the lights of the village in the dark was great. However not being able to see more than 10m in front of you wasn’t as great, as it was nearly impossible to see the path ahead. 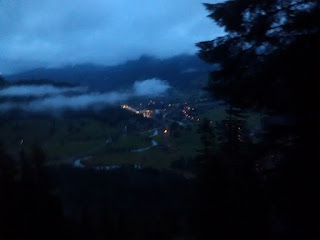 By the time the sun had risen,  we had climbed to about 600m above the valley floor (or 1,800m above sea level) and we gratefully paused to have our breakfast of brioche and pain au chocolats. Enjoying the cool morning sun was a great start to the day, ruined only by the clouds obstructing the view of the valley far below.

Soon we were off again but now our walk was much easier as after an initial steep bit therewas a much gentler ascent and when we had to walk downwards slightly a few of us were … slightly annoyed. But luckily we did get a few good views on as we went up as the clouds occasionally cleared.

Our respite didn’t last as we again had to climb but know it was more enjoyable as we could at least see what was in front of us (well, unless we were standing in a cloud – who knew that they disrupted visibility?). However soon we reached the top and only needed a few songs to keep our spirits up (and luckily no renditions of 1000 bottles of milk).

Here we had a nice break before heading down during which we eat some snacks, read the log book (some of the messages were very interesting) and left a few messages of our own. Reaching the top was a real achievement though as we had climbed twice as high as the tallest mountains in Britain! 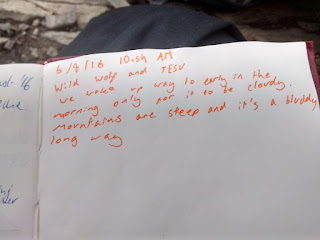 Soon we were on our way down, this time by a different route but not much easier but as we went we got some amazing views (and quite a few questions about the weather further up)

We soon got back down to Kandersteg where we had our lunch while waiting for the bus and then headed for the cable car/gondola to get up to Oeschinensee to meet the others but due to communication failure we ended up going too far and too high up and around the lake and so had to turn back  but we still got to enjoy the refreshing lake water before we had to leave. And our extra little walk did yield some excellent views of the lake!