While most people might know Saint George as that guy who killed a dragon, we know him as something different: the patron saint of Scouting. And as last Saturday was St George’s Day, we spent Sunday down at Scout Park, taking part in the celebrations.

We arrived bright and early at 9am, and quickly got to work setting up the main attraction: an Aerial Runway (or, in other words, a pioneerd zip wire). By 11:30, it was up and ready to go. We soon had a long line of eager Cubs and Beavers waiting for a turn.

Meanwhile, some other Explorers were hard at work managing the candy floss machine and trying to fend off several over-excited Beaver Scouts. After the machine had broken down three times, it finally decided to start working and we were able to begin serving, much to the delight of the Scouts (and a few Leaders!) 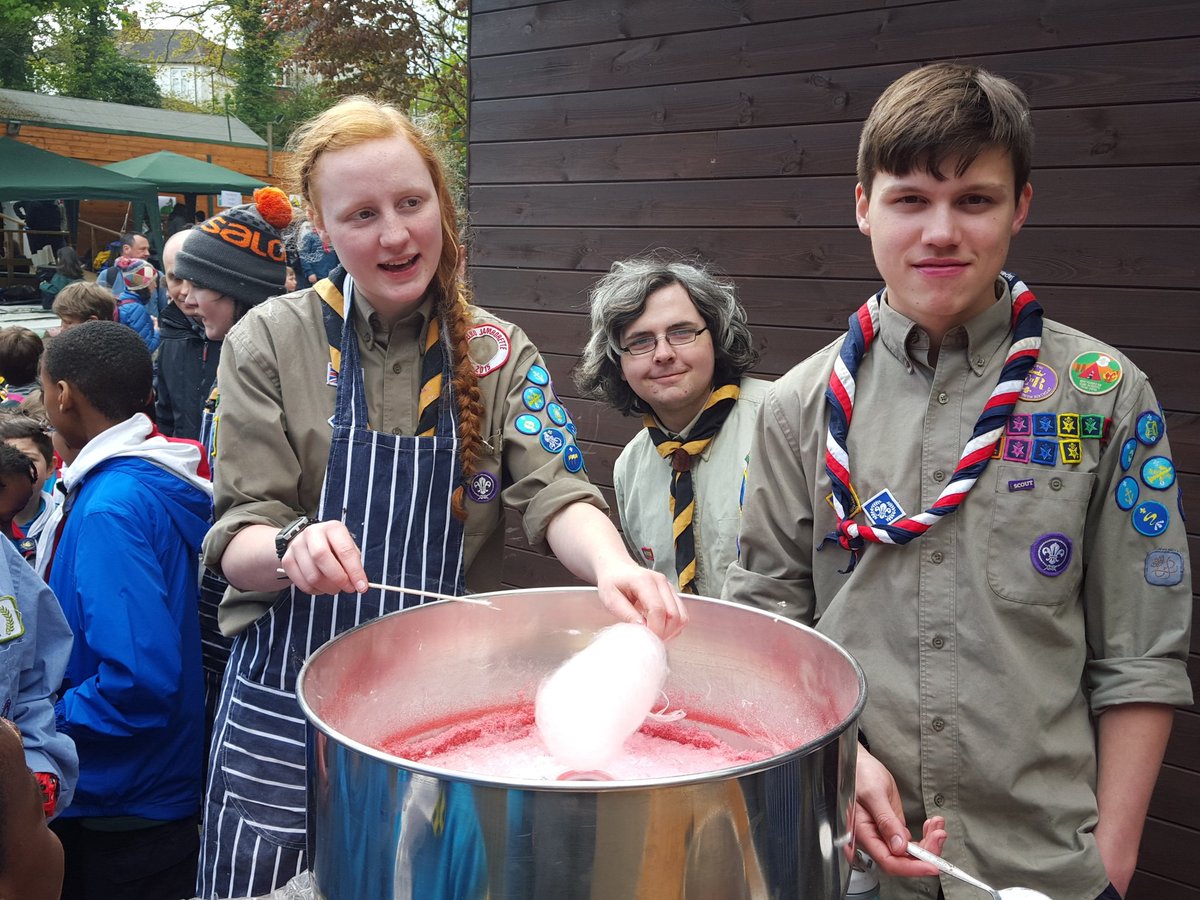 Soon, it was time for the Promise Renewal, and members of units from all over the District gathered in one of the fields. After a few awards had been presented we all said our promises, before carrying on with the various activites.

While those on the candy floss stall dealt with a seemingly never-ending queue of excited children, others continued to harness people up for the zip wire.

At 4pm, the candy floss machine finally gave up and overheated, and we decided to call it a day, as the events were ending soon anyway.

After we’d cleaned up the sticky pink sugar that just seemed to get EVERYWHERE, we headed back down to where the Aerial Runway was being held, to find a water pistol had been introduced, and, once the younger Scouts had left, it quickly descended into chaos.

Soon, all of us had had a go on the zipwire, we’d rescued Marlon’s hat from the lake, the water pistol had been used on pretty much everyone, and it was time to start taking down the Runway.

Last week, we enjoyed an incredible presentation from a former WWESU Leader about his 5 month experience trekking the Pacific Crest Trail from Mexico to Canada. He shared the challenges and highlights of his trip while answering questions from some inspired explorers!
This week we kicked off our night by watching the mini-movies that we made last week, before playing a fun game called “Spaghetti wars”. Then, we excitedly headed over to the campfire circle to enjoy some fresh hotdogs, campfire songs and toasted marshmallows!
It’s been over a week since the snap, crackle and bangs of our 12th annual fireworks display. Luckily for you, there’s only 300 odd days until our next one, and so we’d love for you to check out our video and blog post all about this years event as we look forward to Fireworks 2023! Click the link in our bio to take you there.
Ever wondered how we prepare for our annual fireworks display? Well, luckily for you, Publicity Team member, Sara, is on the case and has spent this weekend talking to some of our fantastic volunteers.
And that's a wrap! Thank you to all our friends and family who we invited to this years' event for coming along and helping to support the unit. We hope that next year we can return to our full size event!
This half term, 8 of our keenest Explorers took on the Scottish Highlands for our annual hillwalking trip. The challenges of wild camping in difficult weather conditions did not stop us from having a fantastic time and climbing many Munros!